Rasmus is nerding with his colleagues

"Having experienced the flat hierarchy and the energetic workflow at Inviso, I can no longer see myself working in a place where the bosses sit behind glass walls"

At Inviso, Rasmus and his colleagues share their love of tech and data without it becoming a competition of who knows the most. And you can always refuel in the snack bar.

How did you decide that you wanted to work at Inviso?

I first came across Inviso at a case competition I had signed up to during my studies. At that time, I had not heard of Inviso or Alteryx and Tableau, which are the software programs we're known for working with. I was a little surprised by the way people from Inviso could work with their tools in a data-driven way, and at the effect and values their tools had, even though they weren't directly 'code-based'. It was really cool to get a feel for how companies actually work with data out in the real world on the flip side of all of our theories and mathematical equations here at the business school.

Seeing all the energy from the Inviso employees was also really motivating. Our group trainer from Inviso was almost more enthusiastic about teaching us about data sets than we were about learning them. He was genuinely interested in what we were doing and was able to completely outsmart us with his skills whenever we miscalculated. It wasn't a competition about who was the smartest. Instead there was just so much energy from everyone.

Now you work at Inviso yourself - do you feel your job is relevant to your studies?

Yes, I think so. In short, we help companies use and understand their data. Our work involves investigating how a company can approach data, and what it wants to understand from that data. Then we devise a solution that gives them the overview they want. In this process, it's important to have both an in-depth understanding of data and an understanding of PCs and databases - so how machines process numbers and texts, and how we get them to run properly so that processing large quantities of data becomes easier.

You also have to be able to communicate your data work, visualise it, and make it easy for the company to run the solution by itself. But we are also a tech company, so it's not always just a case of turning over a CSV file and doing a graph. Sometimes you also need some proper programming or quirky modelling skills as well, and I love being allowed to do this.

Has the job given you an idea of what you want to do in the future?

I have certainly discovered what type of workplace I prefer. Having experienced the flat hierarchy and the energetic workflow at Inviso, I can no longer see myself working in a place where the bosses sit behind glass walls. One of those places where you have to report any changes to a middleman who then has to get approval from the boss, and then two months goes by before you get a formal response by email.

That's not what it's like at Inviso. If I have an idea for an IT change, I just talk directly to one of the process managers who'll say "give it a go" without me needing to provide a lengthy written description so that it can be addressed at a board meeting. I think that's really cool.

Inviso is no longer a startup, but it still feels like a relatively small workplace, where they really appreciate you throwing yourself into the job with a passion for what technology and data can do for the world that we live in.

What's the best thing about this workplace?

Probably my colleagues. We do a lot of things together, such as the Friday bar, sports events and eating together. I love that we can both nerd and socialize together. For example, if there are a lot of us in the office, sometimes we'll keep nerding into our free time. We might decide to collect data about anything from tweets in the election campaign to the beer consumption in the Egmont Petersen dorm. It's really cool being able to work on your projects together and to share them and get each other's feedback.

We also work really well as a team on shared projects. It feels a bit like working with a really good study group, where you inspire each other without it becoming so career-focused that you end up running a solo show.

What about the snack bar?

The snack bar is high on my list of the benefits of working at Inviso. It's split in two - a healthy side with raw bars, wholemeal biscuits, and ginger shots and so forth. That's the side I try to stick to. But after a long day, you might also find yourself opening the unhealthy side of the cupboard and enjoying your fill of liquorice pencils and chocolate bars.

Our snack cupboard was given an upgrade after a study trip to San Francisco when we saw that all the other tech companies had really good snacks in their bars. You need plenty of energy to think big!

Consultant of the future 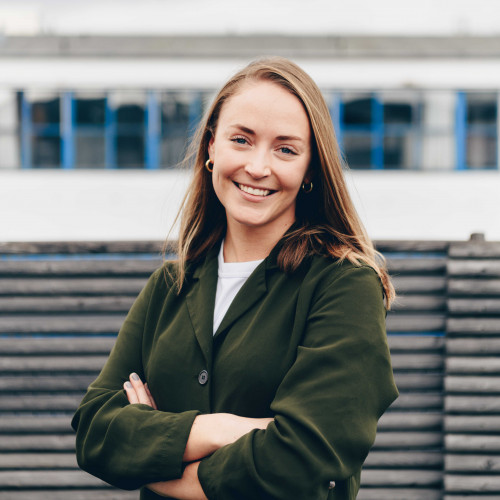